Writers are receiving love and respect but not monetarily, says Hansal Mehta

‘City Lights’ director Hansal Mehta on Wednesday said writers and directors are given a lot of love and recognition in the film industry today but it still does not translate into monetary benefits. The filmmaker said the industry has come to realize that the role of a writer is very important.

“We have now begun to respect writing. We have begun to understand the role of writing in films and writers are slowly beginning to become the most important people in the developing of a film or series,” Mehta stated in his recent interview.

But when it comes to compensation, Mehta said there is still a lot of “disparity”. “it is happening. Like the rest of the industry, this is also driven by your last successful project. But there is a lot of opportunity for genuine writers.” Mehta was speaking on the sidelines of the event ‘Content Hub’, where he was part of the panel discussion ‘Role of Writers and Directors in Developing the Magic Script’.

When asked about the creative liberty that writers and directors can take with their films in the current scenario, Mehta said, “Unfortunately, India is being a young democracy, our democratic institution has not been robust enough and because of that we have always suffered from this. Our freedom of expression is always been subjective to the interpretation of the establishment,” Mehta added.

On the work front, Mehta’s next film release will be Rajkummar Rao and Nushrat Bharuch starrer ‘Chhalaang’. He is also working on a web series based on 1992 Harshad Mehta scam.

To interim directions to restrain media coverage related to the drug probe after being questioned, Bollywood actor Rakul Preet Singh had filed a complaint in ... Read More 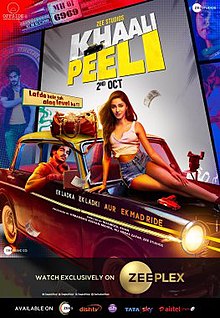 Dates for the upcoming movie “khaali Peeli”are out .

Ishaan Khatter and Ananya Panday's film Khaali Peeli got a release date and it will premiere on an OTT platform. Sharing the news ... Read More