‘What`s Love got to do with it’: Directed by Shekhar Kapur gets over with the shoot

The film stars Hollywood star Emma Thompson and Indian actor Shabana Azmi. It is set between London and South Asia.

Shekhar Kapur took to Twitter and wrote, “Film wrapped! #WhatsLoveGotToDoWithIt.” London-based radio broadcaster and actor Mim Shaikh also took to Twitter and shared a picture from the film’s set with Shekhar Kapur and Shabana Azmi. He captioned the picture: “That’s a wrap on #WhatsLoveGotToDoWithIt – can’t wait for you to watch this beautiful and intercross cultural movie we have shot over the past few weeks! Thank you to everyone.” 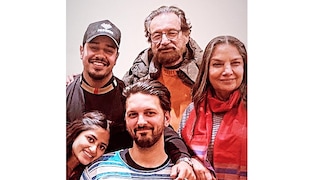 This film is the first collaboration of Shekar Kapur and Shabana Azmi after Masoom in 1983.

The film also stars actor Lily James of the film Baby Driver and Shazad Latif of the film Star Trek: Discovery. The film is written and produced by Jemima Khan.

Shabana Azmi tweeted, “Its a wrap for #Emma Thompson. What a warm, generous co star she has been. I will cherish the wonderful times we spent together.”

India will be giving the COVID-19 vaccine to Bhutan and Maldives today. Prime Minister Roosevelt Skerrit of the Dominican Republic has written to PM Narendra ... Read More

The custody of climate activist will be seek by the Delhi police next week after she was sent to jail for three days by the ... Read More

India will commence the coronavirus vaccine drive from January 16, 2021. Three crore people will be given the vaccine which includes healthcare workers, frontline workers, ... Read More