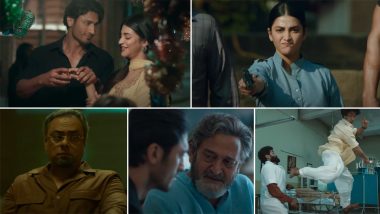 The Power movie is directed by Mahesh Manjrekar and is available on Zeeplex casts Vidyut Jammwal, Shruti Haasan, Mahesh Manjrekar, Jisshu Sengupta, Sachin Khedekar, Prateik Babbar. The movie is given 2.5 stars out of 5.

However, their marriage plans get canceled when a death attempt is made on Kalidas and doubt is on Anwar. But in a twist, Anwar dies, and Pari swears revenge on the Thakur family. On the other hand, Devi Das bound by ties of blood and heritage is forced to take over the mantle from his father and gets involved in the inevitable cycle of violence, vendetta, and power.

Mahesh Manjrekar’s gangster film sounds good on paper but unfortunately, when it is played on screen, the film misses the target because of the tedious screenplay. Anyone can guess the ‘twists’ beforehand and blame it on the lack of novel writing. The hype created was high but the script was not too good.

Manjrekar tries to make an action film with elements of drama but struggles to reach out to the audience. Also, some of the dialogues in the film are tacky. The movie has some graphically violent scenes.

Jishhu Sengupta as the short-tempered, playing Ramdas, merely plays an exaggerated version of his casual self.

Yuvika Chaudhary plays the role of a scheming sister-in-law who is armed with ‘taunts’ and ‘devious plotting’. Sonal Chauhan ends in the film only to lend a shoulder to the heartbroken Devi Das.

Rakesh Rawat’s camera work captures the bloodshed on the screen really well. The fights, gunfights, kicks, and punches kill the fun, but at the time, the slow-motion shots kill fun too. Sarvesh Parab’s editing could have been a little effort to make the narrative gripping.

On April 14, 2022 the film named ‘Saalar’ that is produced by the KGF director Prashnath Neel will star Baahubali actor Prabhas and Shruti Haasan. ... Read More