On Saturday, Taapsee Pannu and Anurag Kashyap spoke about the raid by the Income Tax Department at their residence.

Many actors have come in support of them. Actors Swara Bhasker, Richa Chadha and others have showed their support.

Taapsee Pannu tweeted a three-part statement on Twitter and Anurag Kashyap posted a picture from the sets of the film Dobaara.

To his tweet, Swara Bhaskar reacted with heart-eyes emoji.

“And we restart #DoBaaraa .. with all our love to all the haters,” Anurag had captioned his post on Instagram. 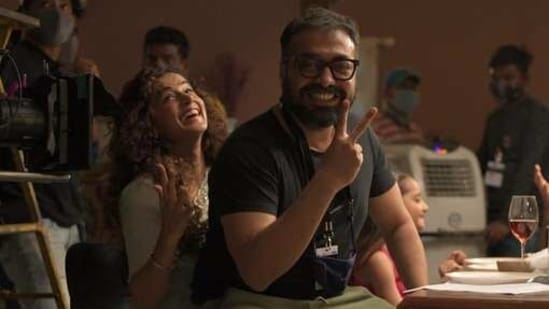 The picture showed Anurag sitting on Taapsee`s lap and smiling.

Others who showed their support were Tisca Chopra, Varun Grover, Shlok Sharma and Satyadeep Misra.

Taapsee in her tweets had written, “3 days of intense search of 3 things primarily 1. The keys of the ‘alleged’ bungalow that I apparently own in Paris. Because summer holidays are around the corner. 2. The ‘alleged’ receipt worth 5 crores to frame n keep for future pitching coz I’ve been refused that money before 3. My memory of 2013 raid that happened with me according to our honourable finance minister P.S- ‘not so sasti’ anymore.”

To this Sitharaman tweeted, “First of all, I am not commenting on any A or B individual. (But) since the names were taken, (I want to say) the very same names were raided in 2013,” Sitharaman said at IWPC (Indian Women’s Press Corps). “It wasn’t an issue (in 2013). It’s an issue now.”

“I am not commenting on a particular case. But if that relates to particular names I want to ask — should we raise questions whether there was a serious omission and commission or should we raise a question about ‘oh it’s happening now’?” the finance minister said. “Please look back. It happened in 2013”, she further added.

On Saturday, Bollywood actress Taapsee Pannu took to social media and reacted on the Income Tax raids conducted by the department at her residence. The ... Read More

‘Bansuri: The Flute’ Movie Review, story of a fractured family

The movie ‘Bansuri: The Flute’ is directed by Hari Vishwanath and stars Anurag Kashyap, Rituparna Sengupta, Upendra Limaye. The movie is based on the story ... Read More