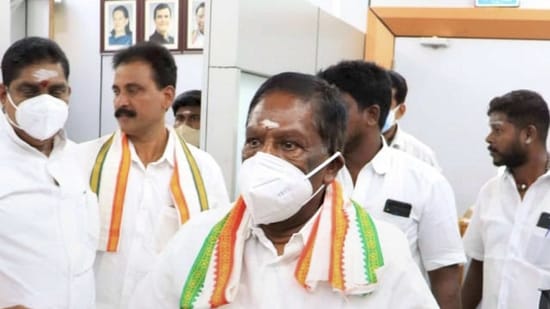 On Monday, Puducherry legislative assembly will take a floor test as the government has lost six MLA`s since January and two on February 2021. The strength of Congress is 9 including the speaker. DMK is at 2. Now the house has fourteen members and CM V Narayanasamy faces challenges as the opposition has fourteen members.

The updates of the floor test are as follows:

On Monday, 16 prisoners escaped from Phalodi jail in Rajasthan`s Jodhpur district by putting chilli power in the prison`s staff eyes. They ran away in ... Read More

The remission plea of AG Perarivalan who is serving a life sentence for his role in former Prime Minister Rajiv Gandhi’s assassination in May 1991 ... Read More

The 66th Filmfare Awards 2021 were held in Mumbai on Saturday. The big winners of the evening were the film ‘Thappad’ with seven trophies and ... Read More