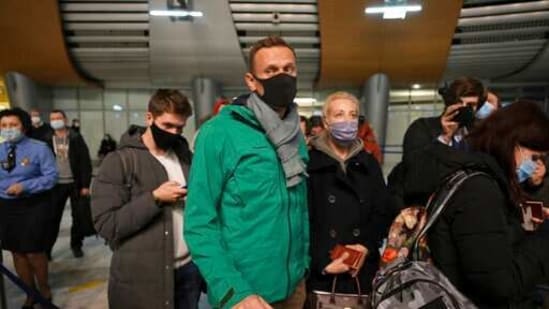 On Monday, Alexei Navalny, the Russian opposition leader, was denied access to legal representation, his lawyer said. This happened after the Kremlin critic was detained at a Moscow airport on arrival from Germany.

He was led away by police at passport control at Sheremetyevo airport.

Thousands had gathered at a different Moscow airport to greet his flight from Berlin, but the plane was diverted.

US President-elect Joe Biden’s incoming national security adviser echoed the call. “The Kremlin’s attacks on Mr Navalny are not just a violation of human rights, but an affront to the Russian people who want their voices heard,” Jake Sullivan said.

The lawyer was not given permission to see her client, who was in a police station near the airport after he returned to Russia on Sunday.

“I am not being allowed into the building of the police department in the district of Khimki,” she said.

Navalny’s spokeswoman Kira Yarmysh said on Twitter that two of the opposition leader’s lawyers had been allowed to enter the police building, but that they were not given access to him.

Navalny who is a prominent critic of Russian leader Vladimir Putin and heads the Anti-Corruption Foundation, on Monday described his detention as “illegal”. “Navalny is a Russian citizen. He was illegally detained,” the group wrote on Twitter.

The arrest of Alexei Navalny who is 44-year-old by police at Moscow’s Sheremetyevo airport on Sunday asked for his release from Western countries.

“It looks like Western politicians see this as an opportunity to divert attention from the deepest crisis the liberal development model has found itself in,” he said.

Joe Biden administration to allow 25,000 asylum-seekers into US

On Friday, the Biden administration announced its plan for tens of thousands of asylum-seekers waiting in Mexico for their next immigration court hearings to be ... Read More

On Friday, the United States released a report that said that an approved operation to capture or kill murdered journalist Jamal Khashoggi in 2018 was ... Read More