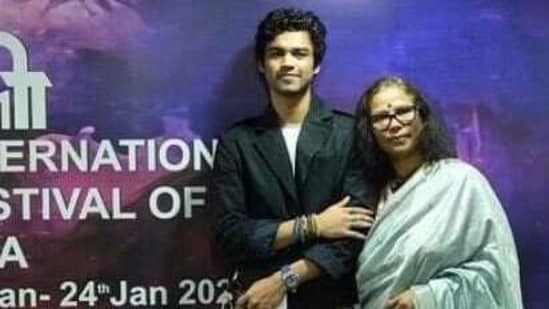 A special screening of the film Paan Singh Tomar at the 51st International Film Festival of India (IFFI) in Goa was attended by Late actor Irfan Khan`s son, Babil, and wife, Sutapa Sikdar, on Friday. Irrfan died after a two-year battle with cancer in 2020.

Babil shared pictures and videos on Instagram from the special screening, including a clip of a speech delivered by his mother on stage. Sharing a picture of the two of them at the event, he wrote, “Beautiful catharsis at @iffigoa.” Separately, he captioned a picture of Irrfan, “Today, I need to share this as @iffigoa made it possible to watch and hear him on the big screen one more time, that too in Paan Singh Tomar. (This man exuded younger energy than me in his late 40s even).”

“I was raised by two legends, not one,” he wrote.

In her speech, Sutapa recalled memories of sharing chai and conversations with Irrfan as youngsters. “I remember Irrfan had dreams in his eyes. It’s a special moment because it’s an honor and privilege to be given a tribute. I’m happy to be here, this is the first time I’ve come out of the home. But one needs closures to walk ahead, and IFFI is a closure,” she said, thanking those in attendance.

“IFFI couldn’t have chosen a better film, because this film talks about a race,” she added, quoting a line from the film about completing races, regardless of winning or losing. “Irrfan’s finish line came too soon, but he played well. We’re proud of you, Irrfan,” she said.

Irfan Khan who was a versatile actor was seen in many movies like The Lunchbox, Piku, Talvar, etc. He earned Filmfare Award for Best Supporting Actor for the film Life in a metro. He won the BAFTA award for his film The Lunchbox.

He died on 29 April 2020 at the Kokilaben Dhirubhai Ambani Hospital in Mumbai.

The Actor Anupam Kher shared a video on Twitter in a response to Naseeruddin Shah's 'Clown' comment on Wednesday. The actor have previously ... Read More

An online report recently stated that Priyadarshan’s much awaited comic caper, Hungama 2 is gearing up for a release during the summer holidays. Soon after ... Read More

Yesterday, On Christmas eve, Kareena and Saif Ali Khan throw a lavish Pre-Christmas party at their house in Mumbai. At the party, many celebrities marked ... Read More