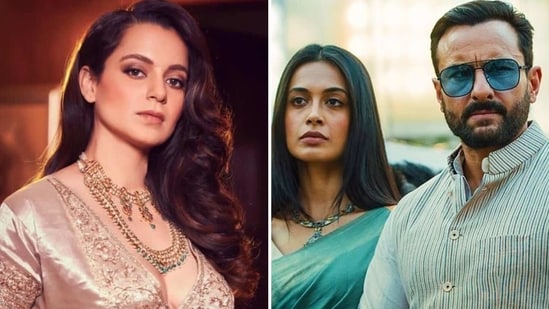 Kangana Ranaut who has been in controversies has again made a tweet about the Amazon Prime Video series Tandav.

The series stars Saif Ali Khan, Dimple Kapadia, Mohd Zeeshan Ayyub. It has already been into controversy for some days as it has hurt the religious sentiments.

Kangana on Monday made a tweet about replying to a tweet about how people have ‘stopped taking insults lying down’ and made the Ministry of Information and Broadcasting seek an explanation from the maker. She wrote, “Because even Lord Krishna forgave 99 mistakes of Sheshupala…. pehle Shanti phir Kranti (Silence must be followed by revolution)…. time to take their heads off… Jai Shri Krishan…” She deleted it after sometime. Many people on Twitter said that her tweets were instigating people to be violent against the Tandav team. Her fans defended her. A person shared a screenshot from Google which showed the meaning of the idiom “take the head off”.

Tandav director Ali Abbas Zafar on Monday evening issued an apology on Twitter on behalf of the cast and crew. “We have been closely monitoring viewer reactions to the web series Tandav and today during a discussion, the Ministry of Information and Broadcasting has informed us regarding a large number of grievances and petitions received on various facets of the web series with serious concerns and apprehensions regarding its content hurting the sentiments of the people”.

“The web series Tandav is a work of fiction and any resemblance to acts and persons and events is purely coincidental. The cast and crew did not have any intention to offend the sentiments of any individual, caste, community, race, religion, or religious beliefs or insult or outrage any institution, political party, or person, living or dead. The cast and crew of Tandav take cognizance of the concerns expressed by the people and unconditionally apologize if it has unintentionally hurt anybody’s sentiments,” it added.

Actress Kangana Ranaut who tweeted about the Amazon Prime Video series ‘Tandav’ claimed that her Twitter account was restricted after she commented on the series. ... Read More

After many police complaints filed against the filmmaker Ali Abbas Zafar and Amazon Prime on Monday, he offered an apology for the web series `tandav` ... Read More

Amazon Prime’s latest series, ‘Tandav’ has been surrounded by controversy since its release. Now, a FIR against the series has been lodged at Lucknow’s Hazratganj ... Read More