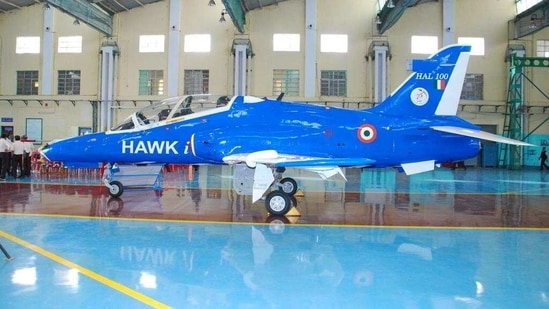 On Thursday, Hindustan Aeronautics Limited (HAL) announced that a Hawk-i aircraft successfully fired a Smart Anti-Airfield Weapon (SAAW) for the first time off the coast of Odisha.

It is being seen as a significant boost for the Indian Air Force and the Indian Navy operated programme for the Hawk advanced jet.

The SAAW is a precision strike weapon that can be used to target enemy airfield assets such as radars, bunkers, taxi tracks and runways.

The weapon has a range of 100 km, indigenously developed by the Defence Research and Development Organisation’s Research Centre Imarat. It has been test-fired from the IAF’s Jaguar fighter planes.

“It is the first weapon to be fired from an Indian Hawk Mk132 trainer aircraft. The Hawk-i project (or upgraded Hawk) seeks to equip the trainer jet with combat capabilities through an internally-funded HAL programme. HAL is in talks with the IAF and navy for the weaponisation of their Hawks”, officials said.

“HAL has been focusing on the Atmanirbhar Bharat campaign. The company-owned Hawk-i platform is being extensively used for certification of systems and weapons developed indigenously by DRDO and Council of Scientific and Industrial Research labs,” HAL chairman R Madhavan said.

The plane was flown by HAL test pilots Wing Commanders (retd) P Awasthi and M Patel. “The pilots executed the weapon release in a textbook manner and all mission objectives were met. The telemetry and tracking systems captured all the mission events confirming the success of the trials,” HAL said in a statement.

Arup Chatterjee, director, engineering and R&D, HAL said: “the state-owned planemaker was indigenously enhancing the training and combat capability of the Hawk-i aircraft, and it was in talks with the Indian military for the integration of various weapons on the Hawk platform.”

The IAF inducted the British-origin Hawk Mk132 aircraft in 2008 to simplify the training of its fighter pilots. The planes are crucial for the training of combat pilots as they serve as a bridge between subsonic trainers and supersonic fighters such as Rafales, Sukhoi-30 MKIs, Mirage 2000s and Jaguars.

All the chief secretaries of Union Territories and States have received a letter from the Ministry of Home Affairs (MHA) to protect the rights of ... Read More

The film Gangubai Kathiawadi that is directed by Sanjay Leela Bhansali and stars Bollywood actress Alia Bhatt is again making headlines. The film was about ... Read More