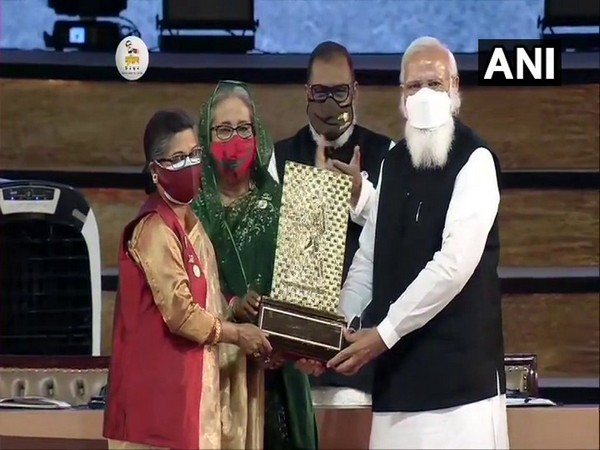 On Friday, Prime Minister Narendra Modi awarded the Gandhi Peace Prize 2020 to the youngest daughter of Sheikh Mujibur Rehman who is the Father of Nation of Bangladesh.

“It is a matter of pride for Indians that we got the opportunity to honour Sheikh Mujibur Rahman with Gandhi Peace Prize,” said the Prime Minister Modi.

PM Modi was wearing a dark coloured ‘Mujib Jacket’ as a tribute to Sheikh Mujibur Rahman.

“On behalf of all Indians, I extend my heartiest congratulations to all of you, all the citizens of Bangladesh. I pay tribute to Bangobandhu Sheikh Mujibur Rohman ji who sacrificed his life for Bangladesh and its people,” he said.

“It is a matter of pride for Indians that we got the opportunity to honour Sheikh Mujibur Rahman with Gandhi Peace Prize. I also salute the brave soldiers of the Indian Army who stood with the brothers and sisters of Bangladesh in the ‘Muktijuddho’ (Liberation War). I am happy to see them present at this event today” PM Modi said.

PM Modi had earlier met those who fought the 1971 Bangladesh Liberation war.

PM Modi is on a two-day visit to Bangladesh to attend the celebration of Bangladesh`s 50th liberation year from Pakistan.

“Today in Bangladesh, the blood of those who fought for their liberation and the blood of Indian soldiers are flowing together. This blood will form such a relationship that will not break down under any type of pressure and will not fall prey to any kind of diplomacy,” Modi said.

PM Modi also stated that to join Bangladesh`s freedom struggle was one of the first movements of his life. 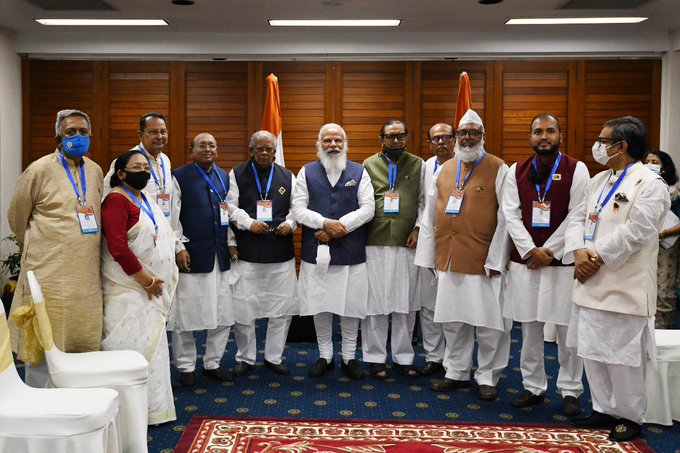 “I must have been 20-22 years old when I and many of my colleagues had done Satyagraha for the freedom of the people of Bangladesh. I even had the opportunity to go to jail during this satyagraha for Bangladesh’s struggle for freedom,” PM Modi said.

India announced on Monday that the Gandhi Peace Prize would be given to Rahman, Bangladesh`s father of the nation.

Bangladesh on Monday said that this award is a benefit for India and Bangladesh relations.

“The award is also a befitting tribute to the ever-deepening Bangladesh-India relations in a year when both countries are jointly celebrating the Golden Jubilee of Bangladesh’s Independence,” the statement read.

As a lot of misinformation about vaccination is spreading for political reasons, Union health minister Dr. Harsh Vardhan on Thursday said the vaccination will be ... Read More

Inauguration of ‘Maitri Setu’ between India and Bangladesh by PM Modi

On Tuesday, Prime Minister Narendra Modi along with other infrastructural projects in Tripura also inaugurated the ‘Maitri Setu’ between India and Bangladesh. The inauguration was ... Read More

The  stUnited Statesate department spokesperson Ned Price said that US encourages India and Pakistan to resolve the concerns through direct dialogues. He said this while ... Read More