Chasing a target of 163 runs, Mahendra Singh Dhoni’s captained CSK had a very bad start. The team lost two wickets in the initial 2 overs. The innings was handled by Anbati Raidu (71) and Faf du Plessis (58) and a partnership of 115 runs for the third wicket. With this win, the CSK is on top in tally by securing 2 points. Mumbai Indians ‘ Trent Bolt, James Patterson, Jaspreet Bumrah, Krual Pandya and Rahul Chhar took 1-1 wickets.

Highlights of the second innings 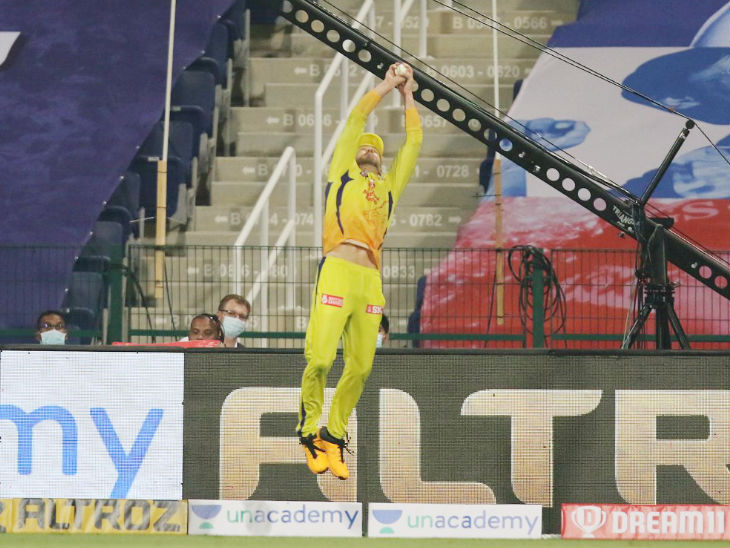 Ravindra Jadeja and Deepak Chhar of CSK took 2-2 wickets. Jadeja carried out Saurabh Tiwari (42) and then Hardik Pandya (17). Faf du Plessis took a spectacular catch on the boundary of both the players. Deepak sent Surya Kumar Yadav (17) and Trent Bolt (0) to the pavilion.

Highlights of the first innings

Deepak Chhar, who defeated corona, defeated the first over-throwing
corona, threw the first over of the match. Mumbai made 12 runs. In fact, 13 people, including deepak and Rituraj Gaikwad of the CSK team, were found to be corona positive before the tournament began. All the people, except Rituraj, have been cured.

Dhoni says set up this time is new

After the toss, Dhoni said in a witty manner on social distancing that we wanted to know whether the fielder would be able to keep the slips in the slip. This time the set up is new. From isolation to practice, most of the enjoy. The team is fully prepared. Rohit Sharma has been playing with almost the new team in the UAE this time compared to the last time. We hope that our record will improve here.

No IPL, no World Cup: 3 Indian players who stand to lose the most if IPL is cancelled

This is the year of the T20 World Cup and hence, the Indian management and selectors were looking at the Indian Premier League to ... Read More Ranjit Singh: The Englishman, who also used to feed sickness, was famous for viral batting

Maharaja Kumar Ranjit Singh of Jamnagar, who is said to be the indian cricket, has a birthday today. Born on September 10, 1872, ranjit Singh, ... Read More

The Executive Board of the International Hockey Federation (FIH) on Friday announced that India would be hosting the Men's Hockey World Cup in 2023. Spain and Netherlands have been confirmed as the ... Read More