Anurag Thakur, Union minister has been appointed as Captain in Territorial Army 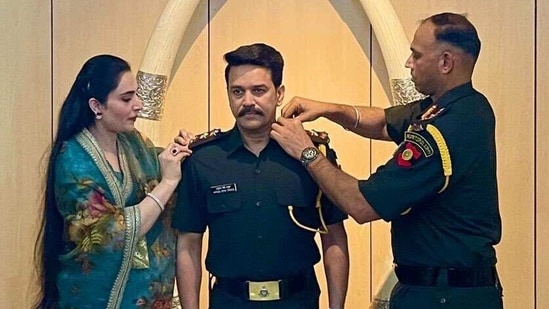 On Wednesday, Union Minister Anurag Thakur has been appointed as Captain in the Territorial Army. He is the first serving MP to be appointed for the post.

According to a statement, in July 2016, the then Chief of Army Staff (COAS) General Dalbir S Suhag TA commissioned Anurag Thakur into Territorial Army.

The statement said that Thakur was promoted as Captain in the 124 Sikh regiment.

“I am extremely honoured to have been promoted to the rank of Captain. I would like to reaffirm my commitment for serving the people and the call of duty towards mother India,” the minister said.

He also mentioned that his grandfather and great-grandfather had served the army. “I come from Devbhoomi Himachal which has a long tradition of (its people) serving in the armed forces. I am glad I could carry on the mantle of my ancestors. It’s a privilege to wear the uniform,” he said.

“This is the third generation from my family who is serving in the armed forces. It is an honour to be part of both army and the Parliament. I come from a constituency and state where people from every third house serve in the army. The first army officer to be honoured by the Param Vir Chakra was from Himachal Pradesh only,” he added.

Thakur said that he feels honour to serve the society and also said that he will always serve the country and will be ready for the call of duty from his regiment in the army.

Thakur has passed a personal interview that was conducted in Chandigarh and cleared the SSB exam and has joined the army after that. He also did a two-weeks of pre-qualification training in Bhopal.

Priority for Rajasthan government will be medical and health sector: CM Gehlot

On Saturday, Chief Minister Ashok Gehlot said that on April 1 the registration process for universal health insurance coverage scheme that will be rolled out ... Read More

Despite Centre`s order, Twitter did not take action against some handles: Explains why

On Wednesday, Twitter said that in the past 10 days, it has reacted to the request by the government to block some accounts but has ... Read More